(~ Ed. Do not think for one second this decade old technology is NOT being used on Us as well to keep us from attaining higher consciousness and keeping the sheeple dumb, numb and mentally confined.

It is the stated goal of the Society of Jesus, Jesuits, to annihilate all other religions but Roman Catholicism. Jesuit Priest Fr. Xavier created the word Vaccine, fyi. (here.) 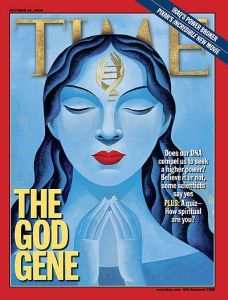 The God gene hypothesis is based on a combination of behavioral genetic, neurobiological and psychological studies. The major arguments of the hypothesis are:

(1) spirituality can be quantified by psychometric measurements;

(2) the underlying tendency to spirituality is partially heritable;

(3) part of this heritability can be attributed to the gene VMAT2;[1]

(4) this gene acts by altering monoamine levels; and

(5) spiritual individuals are favored by natural selection because they are provided with an innate sense of optimism, the latter producing positive effects at either a physical or psychological level.

You cannot make up this shit. Truth is stranger than fiction. We are all under attack from so many known and unknown sources.  This aerial administered “Fun” vaccine courtesy of the Pentagon (using U.S. taxpayer dollars) is using aerial virus’ to keep all from accessing higher consciousness and connection to source.  They are literally spraying us from the skies with vaccines to keep us dumb, numb and unable to become what we truly are. …

Pure Enlightened Consciousness as Co-Creator’s of this one Uni-verse comprised of many, many verses. (think crystal diamond body form. Diamonds are formed through heat, time and tremendous pressure).

Additionally, the video above by Pentagon official states that food and water deliveries of the “Anti-God” Gene is also viable and usable on the unsuspecting masses.

“In non-conflict zones, effectiveness [of the fundamentalist vaccine] could be measured by a decrease in the people attending religious activities.”   — Quarterly Report on the Pentagon’s FunVax (Fundamentalist Vaccine), 6/1/07

The Pentagon may vaccinate large populations in the Middle East with what is being called FunVax – a fundamentalist vaccine. As explained by Pentagon researchers, the FunVax uses an airborne virus to indiscriminately infect populations considered high risk for religious fundamentalism. The virus in this vaccine purportedly has been tested and shown to reduce fundamentalism and religiosity in all who are infected by damaging what is called the “God gene.”

Though this may sound like some bizarre science fiction novel, the four-minute Pentagon video presentation and official FunVax report below show that this vaccine against fundamentalism is actively being tested for implementation. As it has been a few years since this date of this video and report, it is entirely possible this program has already been started.

There is some possibility that the above video and document are faked. But if they are, it is very intelligent disinformation. Who would spend all of the time and money required to come up with such a sophisticated and coherent story? And why? Knowing how science and the military often work together, a program like this is all too possible. I once attended a lecture by Al Gore’s science advisor in which he said he had been invited to see some of the most secret biological research programs being undertaken by the U.S. military. He said it gave him nightmares for months.

The Pentagon report states that tests have been conducted on six different methods of dispersing the virus: “high altitude release, water supply release, insect transmission, diffusion by a ground level object such as a car, diffusion from a stationary object such as a bottle and infection of food supply such as cattle or produce.” You have to wonder where these tests were conducted and on whom. The minutes of the report also mention discussion of a “proposal for a suicide gene.”

Here’s a quote from the FunVax report’s recommendations section:

Of the 600 variants of Vesicular Stomatitiis Virus tested, VSV287 had the greatest decrease of VMAT2 within mice. However, this may not be the case for human subjects. All 600 strains of VSV should be retested on human subjects in the clinical group.

For a long list of secret government tests in which soldiers, prisoners, and even the general public were unknowingly treated like human guinea pigs, click here (links provided to verify each case)