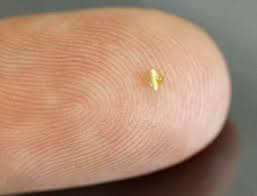 Former DARPA director and now Google executive Regina Dugan is pushing an edible “authentication microchip” along with an electronic tattoo that can read your mind. No this isn’t a movie script about a futuristic scientific dictatorship, it’s trendy and cool!

Further out, the company is looking at improving on the password by using electronic tattoos, swallowable pills and other forms of authentication. Woodside was joined onstage by Regina Dugan, the former DARPA head that now leads advanced research for Motorola

‘far more interested in wearing an electronic tattoo to piss off their parents.”  vitamin authentication “small chip inside of it with a switch…inside out potato battery, acid services the electrolite and the switch goes on and off, an 18 bit ecg like switch in your body and your body becomes and authentification token.  Yes, it’s really true, so that becomes my first “super power”. my arms are like wires, my legs are like alligator clips, when i touch my computer, my phone, my door, my car, i am authenticated in,”  made by a company called “proteus”. cleared by hte FDA and can take 30 a day for the rest of your life..we can just tell that you’ve taken the pill, the medical community Q: Does Google now know everything I do and everywhere I go?  Regina Duncan claps loudly and laughs.  “It’s early, but we are excited about where it is going”, closes head of Google Product Development.

US biotech giant will create 200 jobs in Britain as it picks the country to produce a ‘smart pill’ which can tell if a patient has taken their medication or not. Proteus confirmed in a statement that its tablets, which contain edible microchips, will be produced at a site in the UK while several teams within Britain’s state-run National Health Service plan to test the benefits of using the sensor technology in various fields.

In May 2013, Proteus revealed that it received $62.5m in funding for the pill production. Proteus received European and US approval for its technology system where the ‘smart pill’, which is about the size of a grain of sand, is linked to a patch worn on the patient’s abdomen.

Proteus Digital Health, at its core, involves a tiny, all-organic sensor that people swallow with their medication.

The sensor contains tiny amounts of magnesium and copper that react together, sending a wireless signal to a battery-operated patch that’s worn on the patient’s abdomen. The patch, which lasts about a week, reports its data to a tablet or smartphone via Bluetooth, and the device forwards the information up to the cloud. Once the data is in the cloud, it can be monitored by doctors and other caregivers.

Proteus is addressing a key driver of healthcare costs. Repeat illnesses and re-admissions are often caused by patients not taking their medication or failing to follow medical orders while at home. The Proteus hardware and software give caregivers a way to make sure they do.

Proteus became a company in 2001 and has been working with the FDA to approve its technology since the mid-2000s. The company has received European Commission (CE mark) and FDA market clearance in the U.S. for its wearables and Ingestible Sensors.

A handful of health systems in the U.S. and U.K. are now testing the Proteus system in what Proteus calls a “private beta.” The company isn’t saying when the product will become generally available.

To fuel the rest of the beta testing, the company has just taken an new $52 million to add to the $120 million it announced in early June. Proteus’s funding total is now $291.5 million, the investments coming from Carlyle, Essex Woodlands, Kaiser Permanente, Medtronic, Novartis, Otsuka, Oracle, ON Semiconductor, and others.

Proteus, too, is benefiting from a shift toward population management and value-based care. With its patented method of making sure people take their meds, it can explain in about one sentence how it can save its healthcare provider and insurer customers lots of money. It’s a story investors might easily latch onto.

“The key will be the status of their sustainable financial revenue models,” says HealthTech Capital’s DeGheest. “Proteus is more a of a drug device play, but will need a very high IPO valuation based on prior fund raising levels, so it may need more quarterly revenue growth to get there.”

Take two microchips, call me in the morning

The pill of the future has arrived. And it’s prepared to hold a one-way conversation with your doctor from deep inside the lining of your stomach.

The FDA has approved the use of tiny sensors to be embedded within drugs to transmit information back to your physician. The silicon chip conveys details about how your body is responding to the medication and your actual frequency of use.

“It’s like Big Brother watching you take your medicine,” said Eric Topol, who is the director of the Scripps Translational Science Institute and has written about the future of medical technology.

“Directly digitizing pills, for the first time, in conjunction with our wireless infrastructure, may prove to be the new standard for influencing medication adherence and significantly aid chronic disease management.”

The FDA’s approval was only for the sensor’s use within placebos, with further testing for how it interacts with actual drugs still required before it can hit the market.

According to Nature.com, here’s how it will work:

“The sand-particle sized sensor consists of a minute silicon chip containing trace amounts of magnesium and copper. When swallowed, it generates a slight voltage in response to digestive juices, which conveys a signal to the surface of a person’s skin where a patch then relays the information to a mobile phone belonging to a healthcare-provider.”

You read that right: Your digestive fluids will ignite an electrical transmission. And here we were, thinking all they were good for was breaking down chunks of hot dog.

And that patch which patients will have to wear will also track physical markers including heart rate, body temperature, rest and level of activity. These various points of information will all serve to present doctors with a comprehensive snapshot of a patient’s response to the medication and influence future treatment or dosing.

If approved on a wider level, scientists hope the technology can eventually replace more invasive diagnostic procedures such as blood draws or MRIs.

“Let me keep it simple. They don’t have to come inside your house. The eavesdropper can simply use a GPS tracking device to perform electronic harassment and view everything about your life while you are in your car, shopping, what restaurant you like to eat at, wherever you go, friends, family, it doesn’t matter. It is all in full view for your enemies and their allies, complete with your telephone conversations. They have full view of the inside of your home or business office online, and it doesn’t matter if the lights are off or what room you are in. The cameras are infrared and/or x-ray, so you literally have no place to hide, even-or especially-in your own home. There are a large number of GPS devices, phone bugs, wireless cameras and other tracking devices, so don’t waste your money on over-the-counter bug sweeps. They are a rip-off because most of them can’t locate or identify the newer surveillance devices.”

The Brain of Skynet Neuromorphic Computing

Nano-chips removed from a “powder” reported to be coating the inside of “H1N1” vaccine in comparison to a human hair.

( Sept. 2009) Shares of VeriChip Corp tripled after the company said it had been granted an exclusive license to two patents, which will help it to develop implantable virus detection systems in humans.

The patents, held by VeriChip partner Receptors LLC, relate to biosensors that can detect the H1N1 and other viruses, and biological threats such as methicillin-resistant Staphylococcus aureus, VeriChip said in a statement.The technology will combine with VeriChip’s implantable radio frequency identification devices to develop virus triage detection systems.

The triage system will provide multiple levels of identification — the first will identify the agent as virus or non-virus, the second level will classify the virus and alert the user to the presence of pandemic threat viruses and the third level will identify the precise pathogen, VeriChip said in a white paper published May 7, 2009.

Shares of VeriChip were up 186 percent at $3.28 Monday late afternoon trade on Nasdaq. They had touched a year high of $3.43 earlier in the session.