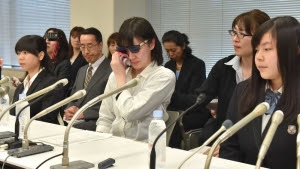 In Japan, young women and girls suffering from severe chronic generalized pain following vaccination with Merck’s Gardasil® or GSK’s Cervarix®, have organized and are speaking out. The issues are being debated at public hearings, at which scientific presentations have been made by independent medical experts who validated the women’s suffering with documented evidence of the severe nature of the pain related to the HPV vaccine. Such public debates do not take place where vaccine stakeholders are in full control of vaccine safety information. (Like in the U.S., for example.) Following a public hearing (February 2014), at which scientific evidence was presented by independent scientists, the Japanese government, not only rescinded its recommendation that girls receive the HPV vaccine, but established guidelines and special clinics for evaluating and treating illnesses caused by the vaccine. It is a scenario that Merck, GSK, and vaccine stakeholders globally are extremely anxious to suppress.
Read More…